In September 2012, Jonathan and I were overjoyed to learn I was finally pregnant! Due date of June 8, 2013.

All fall long we worried that something would go wrong with the pregnancy or baby, but finally in early January we received a "clear" anatomy scan and learned we were having a healthy baby girl. Praise God! 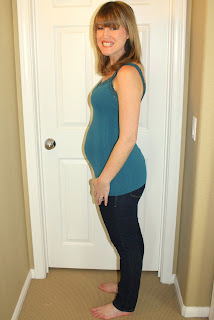 Later in January, I noticed a strange hardness or lump on the side of breast but I figured it was pregnancy related -- a blocked milk duct or just general pregnancy breast changes.

At my next OB Appointment in late February I casually asked my OB about it (because 29-year-olds don't get breast cancer, do they?!) and she referred me to a radiologist to have it checked out.

On March 1, 2013 our lives forever changed when the radiologist found a medium-sized lump in my breast along with one swollen lymph node. She said they were "highly-likely" to be malignant (BI-RADS 5). We knew then it was bad. They did a biopsy on both the lump and the lymph node and we waited knowing the worst was probably coming.

Three days later we received the biopsy results:
- 2.5 cm breast tumor positive for cancer
- Cancer type - Invasive ductal carcinoma (the most common kind of breast cancer)
- Tumor grade - Grade 3 (the most different from a normal cell and the most aggressive type of tumor)
- ER/PR negative - Meaning it does not have estrogen or progesterone receptors (this is more common in younger women)
- HER2/neu status - Unknown (waiting on more biopsy results)
- Stage - Stage IIB (tumor with invasion into at least one nearby lymph node) but could be Stage IIIA if more lymph nodes are affected (but we won't know that until surgery).

It's surreal to think a week ago I happy, pregnant, and fine. Now I'm facing the biggest battle of my life, for my life.

She is still doing fine as far as we know -- kicking around in there and growing.

Medical research has shown that some type of chemotherapy are safe for fetuses and the second or third trimester (I'm 27 weeks today). And surgery can be safe as well.

These are all things we're considering as we come up with our treatment plan. More on that next week.
Posted by KG at 9:50 AM