On Sunday Elise had her first trip to the ER. And while it was a scary and totally exhausting, all turned out to be fine.

I first noticed on Sunday morning that she was super fussy and by mid-day she was inconsolable. I took her temperature and it was 101. I called the nurse line for UCSD Pediatrics and they told me to head to the Children's Hospital ER.

Luckily they got us right in and took Elise's blood and urine. She did NOT like either of those one bit. Then we waited and started to worry that she could be really sick with something terrible. Of course the ER doctor asked me about the pregnancy (normal?) and I had to tell her I had chemo while pregnant. I hate repeating my sad, crazy story.


After a couple of hours, we got the results back and it turned out Elise had a urinary track infection. Poor baby! They gave her IV antibiotics and let us go once her fever was under 100.4. Now we just had to give her antibiotics for 10 days to make sure the infection is 100% gone.

Of course this all happened when both Jon and my parents were out of town, so I was alone, scared, and exhausted. Luckily, our dear family friends, Bill and Kay, came to the ER when I told them the news and Kay even stayed the night at my house with us after Elise was discharged to help out. So sweet.

So I survived Elise's first health scare. While we were in the hospital I just prayed and prayed that it would be nothing serious and easily treatable. And, thank God, it was.  We can only have one of us in the hospital at a time!

The antibiotics worked right away, and she's back to her usual happy self. 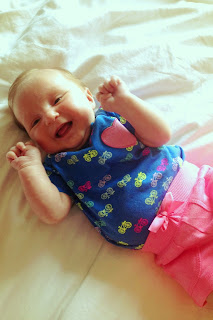 The only follow-up we have to do is a kidney and bladder ultrasound tomorrow to make sure there is nothing obviously wrong with her kidneys or bladder that caused the UTI, but very often UTIs just happen to little girls from bacteria. Nevertheless, please send up some prayers for us tomorrow that the ultrasound shows nothing bad. It's hard for me to trust a "routine" test since the last time I had one of those I found out I had cancer.
Posted by KG at 4:19 PM