Keeping It Real about TNBC

Everyone keeps telling me how "strong" and "positive" I am, which I thank you for and I generally do think I'm strong and positive. But I don't want you think I'm an insane Pollyanna or that the type of breast cancer I have isn't totally shitty.

I've mentioned before that the type of breast cancer I have is called Triple Negative Breast Cancer (TNBC). This is not your Grandma's breast cancer. This type accounts for ~15% of all breast cancers and is most often seen in young women. It's not receptive to the blockbuster drugs that have increased survival rates for other types of breast cancer because it's not receptive to any hormones. And it's the most likely to metastasize (i.e. spread to other organs which basically means certain death). Researchers think there are several genetic components to it (like BRCA), many of which are not yet known, which is why more young women get it. You can read a lot more about TNBC here if you are interested.

Sadly, when news stories report on TNBC they use terms like "deadliest" breast cancer and "poorer survival." So that's awesome. But that's because the hormone-positive breast cancers carry a survival rate in the 90%s and the survival rate for TNBC is more like 70%-80% depending on the studies you read. So you can see that although many people do survive TNBC, you're twice as likely to die of it than other types. One good website I found is called "positives about negative". It's shares realistic and positive news about TNBC research. Like one good thing about TNBC is that when it responds well to chemo (which often happens) the chances of disease-free survival go way up.

What's scaring the crap out of me right now, is that I've not have a PET/CT scan or MRI yet to look for metastasis because those involve radiation is which is not safe during pregnancy. So please keep praying that the cancer has not metastasized (e.g. spread) elsewhere.

I don't mean this to sound depressing if it does, but I wanted to share this information so people don't think "oh poor Kirsten has to lose her hair and have a less-fun pregnancy, but beating this cancer is a slam-dunk". That said, I truly believe that if anyone can be in the 70-80% TNBC survivor stats, I will be. And I believe this... 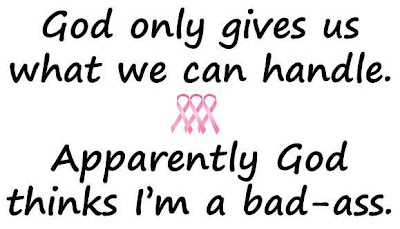 Email ThisBlogThis!Share to TwitterShare to FacebookShare to Pinterest
Labels: TNBC